Greenville, S.C. – December 12, 2018 – UST, Greenville S.C.-based logistical solutions company, is excited to announce the promotion of four employees to new roles within their organization. All individuals work out of the UST headquarters office located in downtown, Greenville, SC and have been with UST for over 20 years combined.

“I am thrilled to be surrounded by such hardworking and dedicated people at UST. We have an incredible company culture and these four recent promotions further solidifies our growth and commitment to our people,” stated Scott Moore, Chief Administrative Officer for UST. “Each of these individuals have exceeded expectations in their previous role, while also being a great example of UST’s values. We look forward to seeing what they accomplish in their new positions.”
For more information on UST, visit their website at www.uste3.com .

ABOUT UST
UST is a national third-party logistics solutions company that specializes in the “final mile” delivery of furniture and appliances from the retailer’s warehouse directly to the customer’s home and is based out of Greenville, SC. With 137 employees and over 450 independent contractors across 20 states, UST believes that the home delivery experience is not only a commodity, it is key to the consumer’s lasting impression and therefore critical to earning repeat business. UST works with retailers and supply chain providers from all over the country to transform the industry through operations, technology-based systems and creative management solutions. 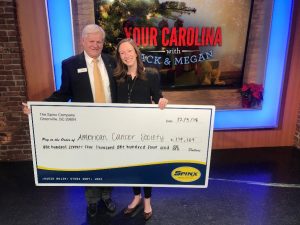 All 80 Spinx stores in South Carolina contributed to the donation. In addition, Stewart Spinks matched the donations raised in the top five stores that collected the most donations for the American Cancer Society during the campaign. The top-performing stores were:

“As a cancer survivor myself, I know the importance of the work that the American Cancer Society accomplishes each day,” Stewart Spinks said. “I’m so proud of our team’s efforts, and I know that our local community will benefit greatly from their hard work and the generosity of so many of our customers.”

Spinx is honored to support the mission of the American Cancer Society and its efforts in education, treatment, and research to discover more successful treatments, and ultimately a cure for cancer.

ABOUT SPINX
Founded in 1972 in Greenville, S.C., The SPINX Company operates nearly 80 convenience retail stores throughout South Carolina, and with approximately 1,400 employees, it is the largest privately-held retailer headquartered in the state. SPINX is committed to making life easier by fulfilling people’s everyday needs with fresh, on-the-go food, beverages and other convenience products delivered in a safe, clean and friendly environment. Through the SPINX Xtras Loyalty program and the SPINX mobile app, the company offers its loyal customers savings on fuel and special promotions. For more information about SPINX or the SPINX Xtras program, visit the company’s website at www.myspinx.com.

About the American Cancer Society The American Cancer Society is a global grassroots force of 2 million volunteers saving lives in every community. As the largest voluntary health organization, the Society’s efforts have contributed to a 25 percent decline in the cancer death rate in the U.S. since 1991, driven by less smoking, better treatments, and earlier detection. We’re finding cures as the nation’s largest private, not-for-profit investor in cancer research, ensuring people facing cancer have the help they need and continuing the fight for access to quality health care, lifesaving screenings and more. For more information, to get help, or to join the fight, call us anytime, day or night, at (800) 227-2345 or visit cancer.org.